Welcome to my blog celebrating the beauty of Maine and New England. You may link to my other 13 blogs though my parent blog:
www.nightbloomingcards.com.
Some of them are oriented around designs for Arizona and the American southwest, but others have a more general range. The designs you see here are available as a wide variety of products on my Zazzle gallery at:
www.zazzle.com/robert_coyne.
I enjoy doing custom work, and will gladly take your requests for one-of-a-kind pieces. I have done logos and animated logos for people who have asked for them. I have expanded into animation and have 26 videos on You Tube at: nightbloomingcards7.
See the list of links for easy access to any of these sites. My blogs include two turorial sites as does my You Tube videos.
I am always willing to share how I create these designs. I think I have developed techniques that many people could enjoy using. In fact, I plan to create a studio of artists around these ideas, so if you are interested; let me know. Feedback on this or any of my blogs is welcome.
I have recently started a series of state mandalas which will eventually include all 50 states. I am starting with the state of Maine. To keep up with the collection as it grows, go to Traveling Mandalas at:
www.travelingmandalas.com
You may also follow on facebook at:
www.facebook.com/traveling mandalas

I have started a new website called Stately Mandalas to sell my collection of state mandala plaq You will find it at: www.statelymandalas.com I am working on the design for New Hampshire, and other artists starting on Massachusetts and Maryland.
Posted by Bob Coyne at 6:30 PM No comments:

I have revised my animated video with new music by Daniel ML @ Fiverr.com. He created this instrumental specifically for this video, and is ready to work on my other states as I finish them. I have added a fourteenth blog: Traveling Mandalas. Mainely Mandalas will be a subsidiary of it in terms of the series of 50 state mandalas. I will, however, continue to post other Maine themed images here as with the Christmas card design on the previous post. Part of my revision of this video was to add the black & white US map with the zoom into the northeast, and Maine popping out. I will do this with each of the state videos.
Posted by Bob Coyne at 3:15 PM No comments: 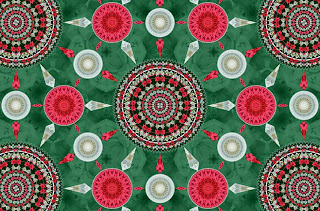 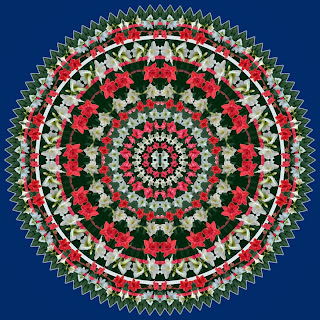 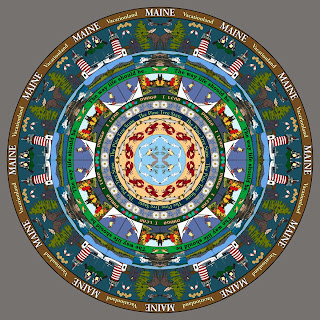 Daffodil Expanded Mandala Array Lamp by robert_coyne
Shop for another lamp at Zazzle
Zazzle now offers table and hanging or pendant lamps. I have used my expanded arrays to design 31 lamps for my store. This one is made with my daffodil array. My creations look especially good with light shining through.
Posted by Bob Coyne at 12:30 PM 8 comments: 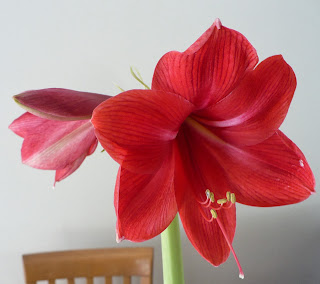 I planted 5 amaryllis bulbs this year with the idea that next year I will use photos of the flowers for my Christmas card design. They are such beautiful flowers that it should be my best holiday design yet. The following year, I will do a nativity mandala that I've been working on for three years. Merry Christmas!
Posted by Bob Coyne at 6:40 PM No comments: 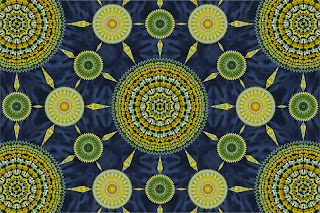 I have completed the mandala array made with photos of daffodils.
Posted by Bob Coyne at 10:05 PM 1 comment:

Bob Coyne
For 28 years, I ran a board and care home for chronically mentally ill in Tucson, and really enjoyed the work; but creating art has always been a part of my life. I have worked in various media including oils and acrylics, stained glass, cloth and wood; but I have been concentrating on digital art for the past few years. I have never made my living with art, but I do take it seriously. I don't want to give up my care giving work, but some supplemental income will be helpful. I specialize in designs using flowers of the Arizona desert and think my creations reflect my appreciation for cacti and nature in general. Many of my designs feature mandalas, and I pray that all portray beauty and harmony. In 2012, I moved back to Maine after 31 years in Arizona. I grew up in Maine, and am happy to be back. I will continue to add to my Cactus Hugger designs reflecting the beauty of Arizona, but will be adding designs that come from an appreciation of the beauty of Maine and New England. I am continuing work in care giving, and always like to do gardening wherever I am. I now live in the country and have chickens. I plan to add milking goats and more.